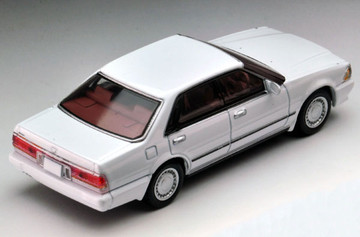 The new era of big cars comes to Japan

- The Y31 Cedric / Gloria that appeared in 1987 aimed at rejuvenating the user with a simple style and an evolved mechanism.
- High performance engines and hard feet, and armed with aero [Gran Turismo] also became a hot topic, boosting boom and a huge hit.
- I gave great influence to the luxury car of Japan after that.

- In the TLV series, we have received good reputation on the 1/43 scale ahead of the schedule, but they also appeared on the 1/64 scale these days.
- The attractiveness of the tightened body line unique to the Y31 series is faithfully reproduced as in 1/43.
- First we will develop with image color black and white.
- [New Cedric is good,] and it is a convincing finish.